Click here to view all our fact sheets on suicide.
These fact sheets are a collaboration between the Centre for Suicide Prevention and the Mental Health Commission of Canada.

Farming and ranching are considered two of the most stressful occupations, both physically and mentally. Unique factors associated with agricultural work may contribute to poor mental health outcomes and even suicide. In Canada, producers (farmers and ranchers) are especially prone to mental health challenges such as depression and anxiety, and they may have less resiliency because of the stressors they experience (Jones-Bitton et al., 2020). While much of the research on resiliency focuses on farmers specifically, some of the factors farmers face are similar to what other producers may face. 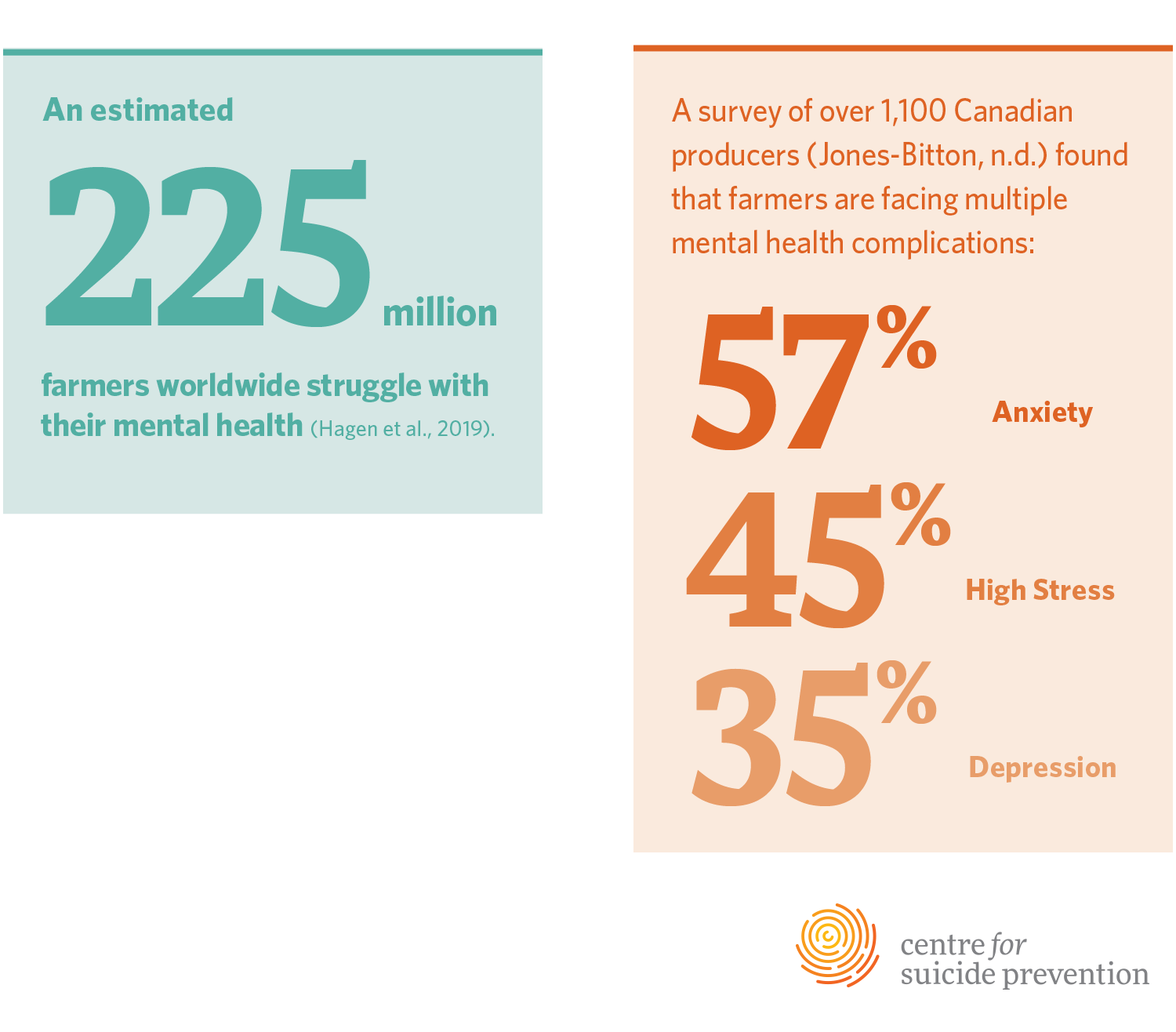 Why are farmers at risk?

Certain factors can place some people at a higher risk for suicide than others, and when multiple risk factors outweigh the factors that build resiliency, there is an increased likelihood that a person may think about suicide (Sharam et al., 2021).

Farmers face financial uncertainty due to factors outside their control, which can cause significant stress. They rely on favourable weather for lucrative crops, they may have debt due to the high cost of running a farm, and they are affected by economic factors such as tariffs and trade agreements.

Because farmers (and other producers) often live in rural and remote areas with small populations, they have limited access to mental health care. While emerging technologies and telehealth may help to mitigate these hurdles (Rojas et al., 2020), over half of Canada’s producers have no access to high-speed internet, which is a barrier to accessing virtual services (Innovation, Science and Economic Development Canada, 2019). Even with access to mental health care, farmers may be reluctant to seek help. Not only is there is stigma about doing so in agricultural communities as it is often seen as a sign of weakness, there may be concerns about confidentiality in smaller areas, where a person’s neighbour could also be their counsellor.

Farming and other agricultural work is often done in isolation. These communities can be small and tight knit but also sparsely populated, which means fewer resources that can offer them support and connection. While self-reliance and autonomy may appeal to some farmers, isolation may lead them to feel as though they’re all alone in their struggles. People feeling isolated or depressed need to know they don’t have to feel that way. Support is available.

Producers often live where they work and can therefore feel as though they should always be working. They may also feel pressure to work while the weather is favourable. These factors can make it hard for them to de-stress and relax. In addition, since many agricultural operations are family enterprises, family dynamics, generational differences, and farm transitioning can increase tensions in their work and home life.

What can be done to reduce these risks?

Many factors can contribute to building resiliency in farmers:

Any significant change in behaviour or mood is a warning sign that someone may be thinking about suicide. For example:

What can we all do to help reduce suicide among farmers?

Individually, we can create a safe space to share and express emotions through open, non-judgmental conversation and gentle questioning, particularly for men. We can also check in with them regularly to have a dialogue and build strong social connections.

If someone you know is exhibiting warning signs, talk with them. You can start by mentioning your concerns: “I haven’t heard from you much these days. Is everything okay?” Keep the conversation going by asking questions and listening to what they’re saying. You don’t have to offer solutions. If you’re still worried about them, ask: “Are you thinking about suicide?” If they say yes, don’t panic. Let them know you’re there for them and help them access mental health supports, including giving them the crisis line number, 1-833-456-4566.

We as individuals can show and express emotion, ask for help when it’s needed, and let everyone else know that it’s okay to do that, too. We can also have more meaningful conversations by asking, “How are you really doing?” if we think they may be struggling.

What can communities do to help reduce suicide among farmers?

What can farmers do to stay mentally healthy?

Resources and initiatives for farmers

A not-for-profit organization focusing on mental health in agriculture across Canada through awareness, community building, and resources. These include Talk, Ask, Listen, a half-day mental health workshop specifically tailored to agriculture, and AgCulture, a program designed to teach mental health professionals about the unique stressors in agriculture.

An informative website by Ontario’s Ministry of Agriculture, Food and Rural Affairs with helpful resources for the mental health and wellness of farmers

A Quebec not-for-profit organization offering free support services for farmers, including checking in to assess their mental health, offering respite from the farm when needed, and intervening with farmers in distress 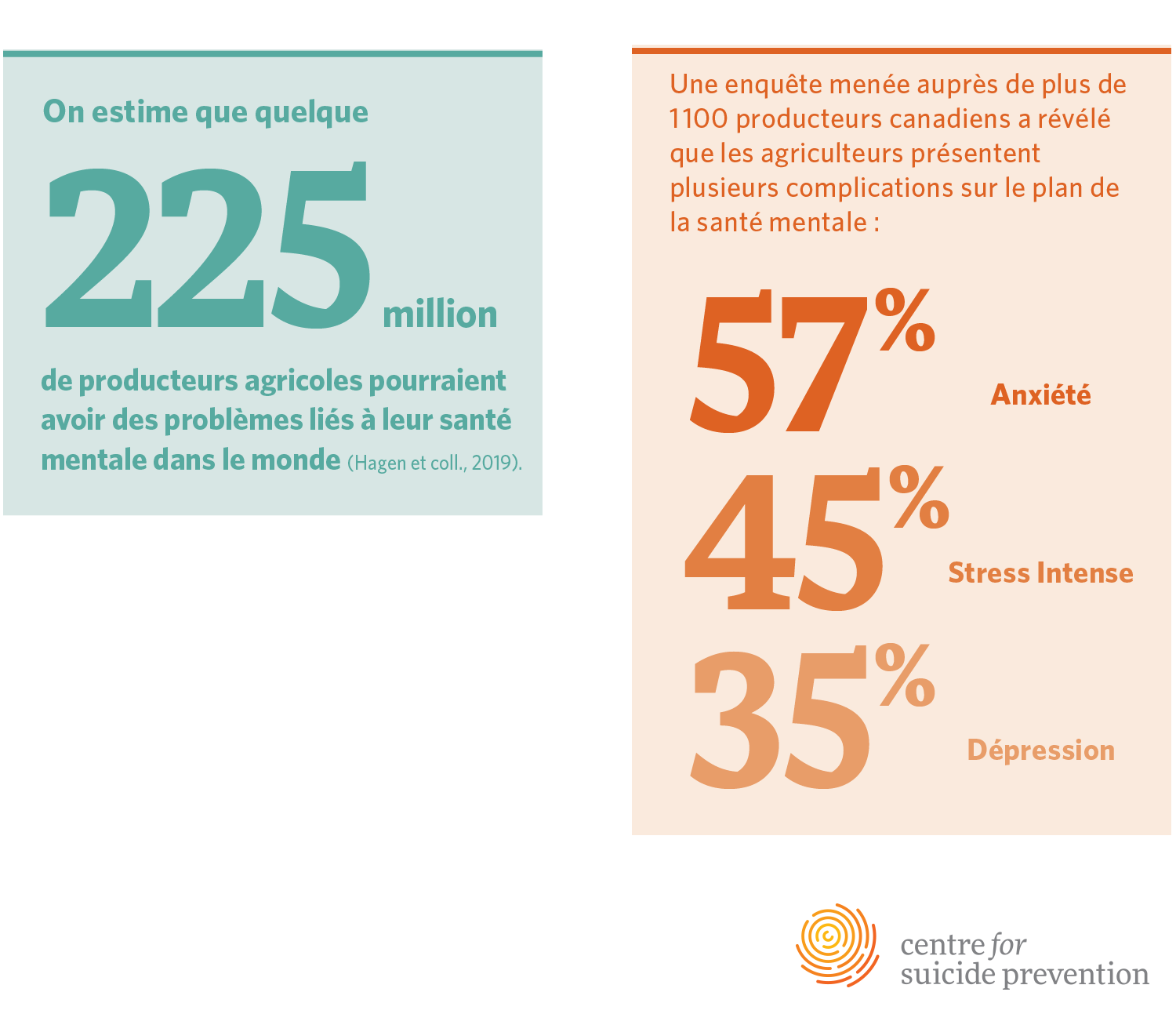