LEARN ABOUT BUDDY UP

How to talk to someone you’re worried about 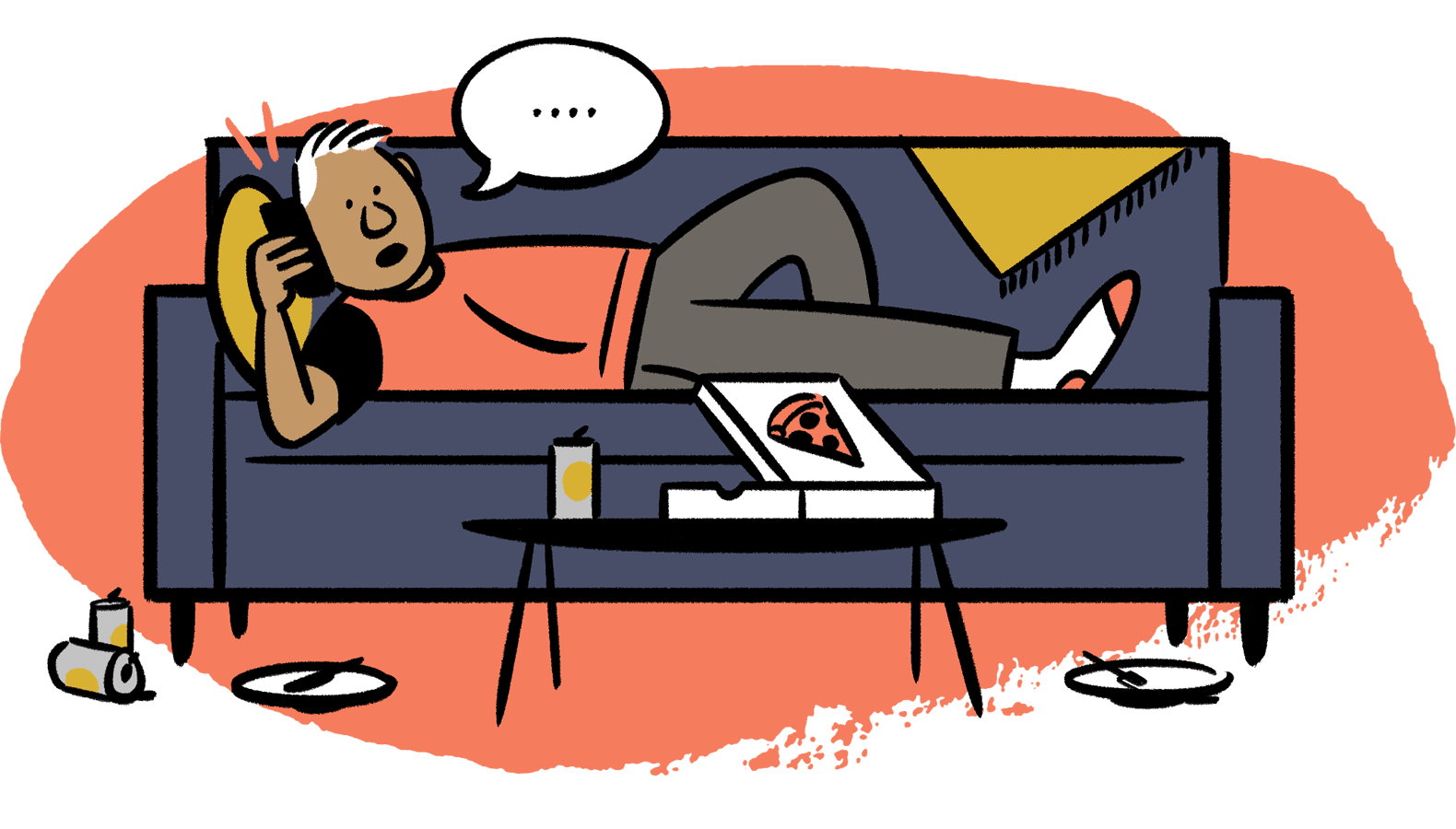 Any noticeable change in his behaviour is a warning sign your friend might not be doing well. These changes include: Ask questions and listen to what he’s saying. 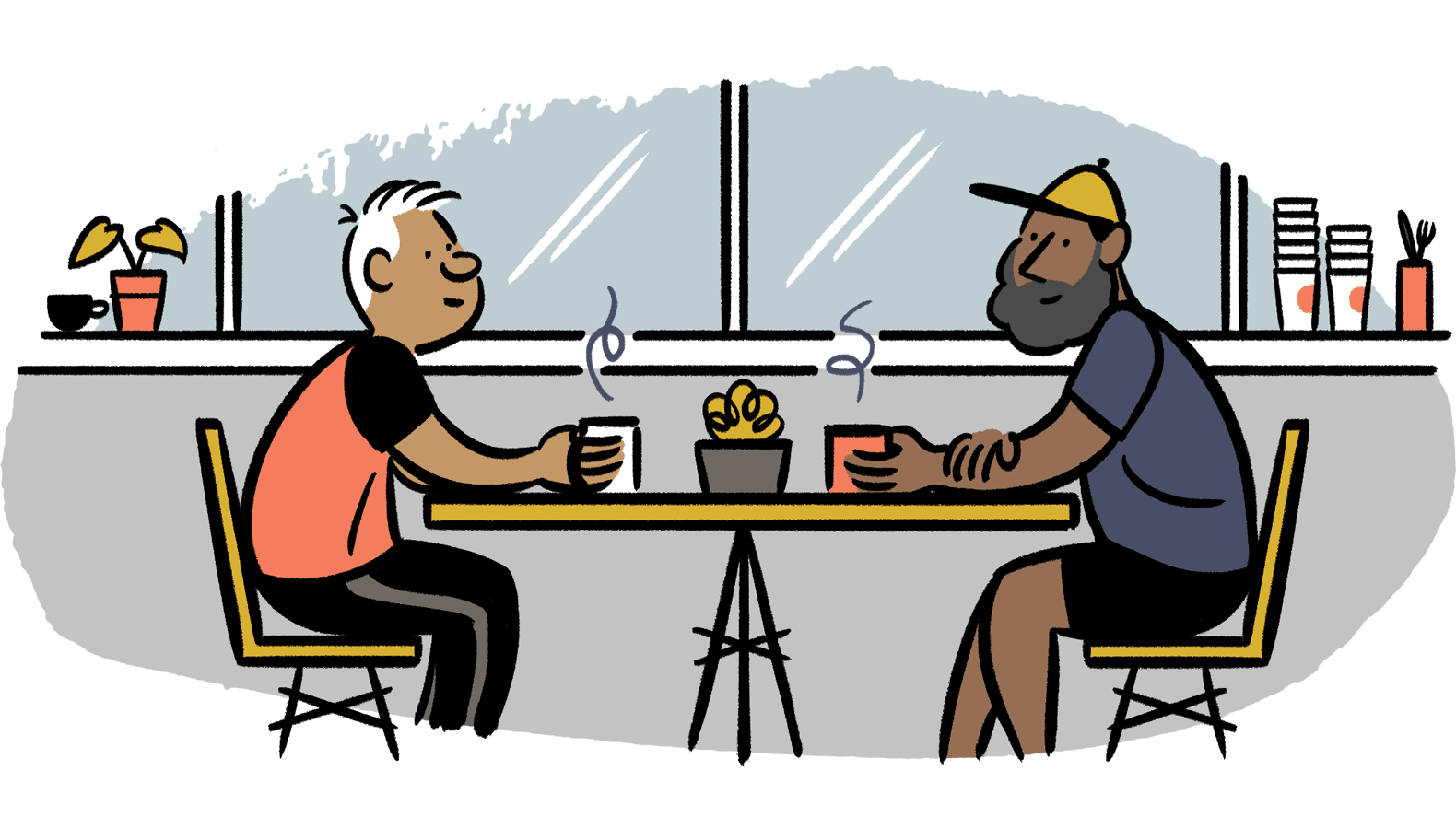 4. Stick to your role

You’re a friend, not a counsellor.

Guys, how do you step up and support your buddies? Tell us in the comments!

To learn more about how to help someone who is thinking about suicide, consider taking a workshop offered by the Centre for Suicide Prevention, such as the safeTALK: suicide alertness for everyone half-day workshop, or the two-day ASIST: Applied Suicide Intervention Skills Training.

Why are men at risk of suicide?

Middle-aged men (40-60) die by suicide more than anyone else, including young people and women (Statistics Canada, 2019).

Men are often socialized not to talk about their emotions, and therefore, men as a group may mask their stress and deal with emotional pain through harmful behaviours and actions, and sometimes suicide, instead of seeking help (Ogrodnickzuk & Oliffe, 2011).

This resource is an introduction to men and suicide. You’ll learn about statistics, warning signs, why men are more at risk, and how suicide can be prevented. You’ll also learn how to have a conversation with someone you’re worried about. If you know someone who is thinking about suicide, or if you’re thinking about suicide, call your local crisis line. In Canada, call 1-833-456-4566.

People thinking about suicide typically exhibit warning signs. Any significant change in behaviour may be a warning sign. Warning signs in men can look like:

Even before a person displays warning signs, we can learn something about their suicide risk by considering different factors in their lives. We all have characteristics or traits that may contribute to or diminish our risk of suicide.

“Risk factors,” those factors that contribute to suicide risk, are always balanced by factors that build and maintain resilience, “protective factors.”

Protective factor – Tendency to look for support when it is needed: On the flip side, men who are more likely to reach out to someone when they’re struggling can find support more easily and can better cope with negative circumstances than those who do not.

Risk factor – Hyper-masculine: Men who were raised with the idea that showing any sign of emotion is a “weakness” are more likely to hide their emotions, which can become overwhelming and may lead them to a point of crisis.

Protective factor – Comfortable showing and expressing emotion: Men who have embraced their emotions and the importance of sharing them with others are better able to cope, as they are more likely to deal with their emotions before they become overwhelming.

Risk factor – Socially isolated: Men who are socially isolated may feel less comfortable reaching out for help, because they don’t have loved ones close by. They may also have less people to ask for help and fewer people to notice that they are struggling and reach out to offer help to them. Men as a group are more likely than women to lose relationships over time, often because they prioritize career and financial success over relationships.

Protective factor – Positive, supportive, and close relationships with family, friends, coworkers, etc: Relationships provide a safety net when men are thinking about suicide, because those people are there to offer help and to be asked for help.

There are certain factors that can place men at a higher risk of suicide than others.

Men as a group are at a higher risk for suicide because they tend to choose more lethal means of suicide. They’re also often socialized not to show or express emotion, leaving them with the idea that any show of weakness will diminish their “manhood.”

Men who have the following characteristics, behaviours, or circumstances may be at a higher risk of suicide:

Certain factors or circumstances can guard a person against thinking about suicide and increase their resiliency. These are some protective factors that can build resiliency in men:

A man who is already feeling inadequate or “less than” (a man) because of suicidal thoughts is not only “not” going to seek help but also make sure he gets this (suicide) done right (Canetto & Sakinofsky, 1998).

Canadian society celebrates masculine qualities – and why not? There is much to be celebrated. However, sometimes these qualities can overwhelm and consume the men they define.

Masculine qualities, like feminine qualities, are neither positive nor negative in and of themselves, but the expectations they attract and the way they shape a person’s behaviour can affect the person’s wellbeing.

From an early age, for example, boys are often told to hold back their tears and men are told to “suck it up” when dealing with life’s pressures: “take it like a man.” Toughness and stoicism are expected; emotional vulnerability is seen as a blemish on their manhood.

These societal expectations may discourage men from seeking help when they encounter mental health adversities and instead can drive them to destructive coping strategies. This can put men at greater risk for increased substance use, risk-taking behaviours, anger and frustration, and, too often, suicide (Seager et al., 2014; Ogrodniczuk & Oliffe, 2011).

How can suicide in men be prevented?

As a society, we must get better at reaching out to men.

Partners and coworkers can be alert to the warning signs of suicide in the men in their lives. If a man is becoming more irritable, for example, this is a sign to his partner and coworkers that he’s struggling.

We can model to everyone, children and adults, that emotions are not gendered, and that it is okay, and even necessary, to show and express emotion and ask for help when it’s needed. One way we can do this is by showing and expressing our own emotions and being honest when people ask us how we’re doing. We can also have more meaningful conversations with people by asking, “How are you really doing?” if we think they may be struggling.

Men need to know where they can find help – we as individuals can provide information to people we think may be struggling.

Workplaces can make the resources available to their employees easily accessible by communicating their existence and ensuring access is confidential. Find out more about what workplaces can do with our toolkit on workplace suicide prevention.

Doctors and others in the healthcare system can play a role in identifying men who may be thinking about suicide. As men may be less likely to directly discuss any issues they may be having, clinicians need to become adept at reading body language, tone of voice, and other physical cues to indicate that the man they’re speaking with may be struggling.  Health professionals need to be better trained in detecting depression among men, which can often result in emotions such as anger or actions like excessive drinking (Ogrodnickzuk & Oliffe, 2011; Paraschakis, Michopoulos, Christoduolou, Koutsaftis & Douzenis, 2016). What can men do?

Men can maintain life-saving social connections by prioritizing friendships and good relationships with their loved ones. They can participate in peer support programs at school, in the workplace, or in the community. Social engagement such as joining a sports team or a music group can create belonging and connectedness for men and prompt interaction with other men who have similar interests, experiences, or struggles.

Men who are struggling with thoughts of suicide may find that asking for and receiving help is not easy. Finding ways to lessen the intensity of these thoughts may take time. Be courageous. Be persistent – help is available.

Programs available for men by men

Tough Enough to Talk About It
This is a program for men working in trades, industry, and agriculture. The program features males who have dealt with stress, depression, suicidal behaviours, or loss from suicide.

Man Therapy
Man Therapy is an interactive website that encourages men to address their mental health and to seek help for themselves if necessary. Men can interact with a therapist, do a self-assessment, and get mental health tips. The website refers users to the National Suicide Prevention Lifeline (USA) and/or a list of professional mental health providers.

HeadsUp Guys
This is a website with information and resources to encourage help seeking among men at risk for depression and suicide.

To gain a deeper understanding of the complexities of men and suicide, we’ve compiled a recommended reading list on the topic, which is available on our website.

1 response to Preventing suicide in men