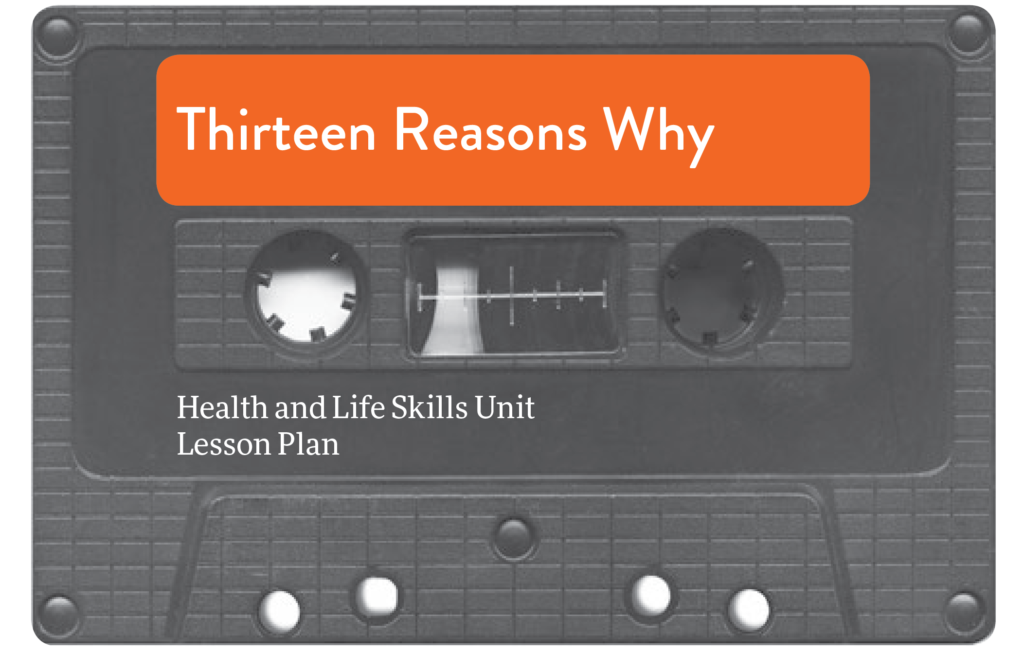 This 4-lesson plan set, developed by the Centre for Suicide Prevention, is for Health and Life Skills teachers teaching about suicide prevention using the Jay Asher novel Thirteen Reasons Why. The novel is intended to be read between lessons #1 and #2.

Lesson 1: Why do people kill themselves?

A. Learning objective: At the end of this lesson, students will begin to recognize that suicide is complex.

A. Learning objective: At the end of this lesson, students will be able to identify protective and risk factors.

A. Learning objective: At the end of this lesson, students will be able to identify warning signs of suicide.

Lesson 4: Talking to someone considering suicide

A. Learning objective: At the end of this lesson, students will be able to describe how they would respond to a friend in crisis. 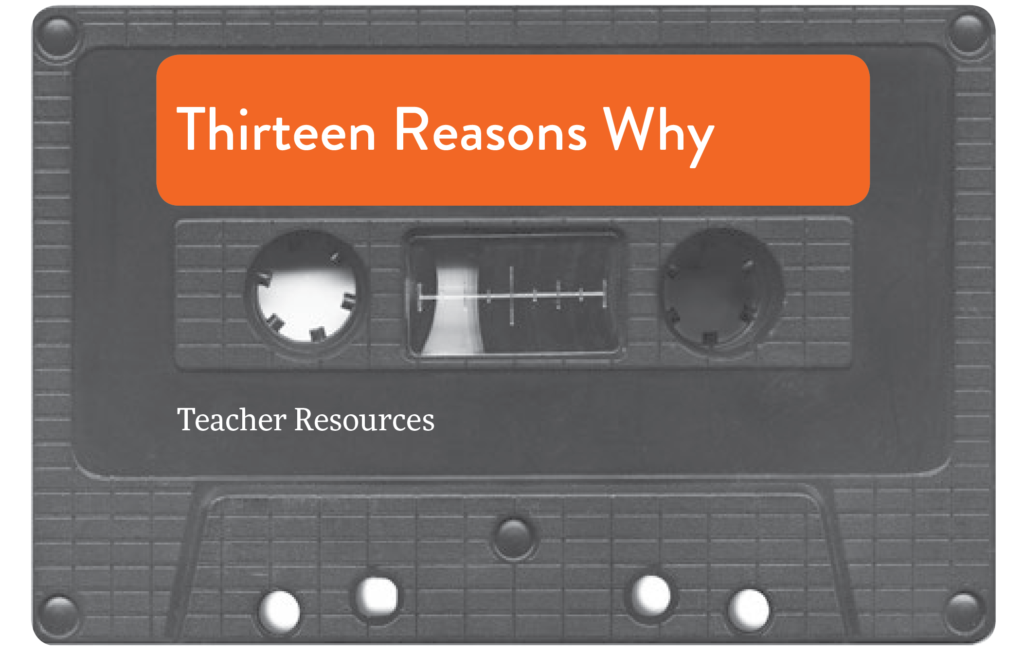 From the Alberta Education Health and Life Skills Program of Studies, stem R-8.2

People with depressive illnesses carry out the majority of suicides. (Mood Disorders Society of Canada, 2013).  The World Health Organization (WHO) predicts that by the year 2030 depression will be the leading cause of disability worldwide (World Federation for Mental Health, 2012).  Less than 1 out of 5 teenagers with depression receive treatment (Essau, 2005).

Suicide theories suggest that people arrive at suicidal crisis partly because they have learned to think in negative ways, resulting in suicide becoming a more likely solution to their pain (Jager-Hyman et al. 2014). According to these theories, the way people in suicidal crisis think about stressful situations (rather than the stressors themselves) can predict suicide. Unhealthy and unrealistic thought patterns, called cognitive distortions, can propel someone toward depression and suicide (Nock & Kazdin, 2002).

The following types of distorted thinking can relate to suicide:

Externalizing of self-worth: the development of self-worth based primarily on others’ opinions (e.g. needing others to approve of me to feel good about myself).

Fortune telling:  predicting and firmly believing that negative outcomes will arise from future events (e.g. acting as if I have a crystal ball predicting negative events in my life).

Comparison to others: the act of negatively comparing oneself to others (e.g. thinking most people are better at things than I am).

Magnification: the tendency to exaggerate or magnify the negative impact of a personal trait or circumstance (e.g. blowing things out of proportion and assuming worse outcomes than what generally happens).

Labeling: applying an overall, negative label to oneself or others (e.g. calling myself negative names).

Hopelessness refers to an expectation that your negative situation will not get better no matter what you do to change the situation.  Hopelessness is a particularly significant precipitating factor in suicidal thought (Saltz & Marsh, 1990).

Hopelessness may be revealed in how a person speaks about themselves, their relationships with others, or their future.

Here are some examples:

Saltz, A., & Marsh, S. (1990). Relationship between hopelessness and ultimate suicide: a replication with psychiatric outpatients. American journal of Psychiatry, 147(2), 190-195.

Myths and Facts about Suicide

Myth
Talking about suicide will give my friend the idea to attempt suicide.

Fact
Talking about suicide does not cause people to think about killing themselves. Asking about suicide gives them the opportunity to speak openly about what’s going on and shows your friend that you care about them!

Fact
Even when suicidal behaviour seems impulsive, there have usually been prior warning signs and behaviours.

Myth
If my friend is suicidal now, they will be suicidal forever.

Fact
No, your friend’s suicidal thoughts may be related to a temporary situation that is causing them great stress or emotional pain. These feelings will pass especially if they have help working through them.

Myth
My friend will be angry if I try to help them.

Fact
Your friend might become angry or defensive because of embarrassment or shame or feeling that they do not need help. Even if your friend doesn’t accept help, you need to tell an adult you trust that your friend is suicidal.

Myth
My friend seems to be feeling better so they are no longer considering suicide.

Fact
Unfortunately, this is not necessarily true. Sometimes when people act like everything is okay, or they act happy after a long period of sadness, they are still struggling. They may appear suddenly calm after a period of anxiety and agitation. This may indicate they have decided to take their life and are resigned with the decision. Make sure that an adult knows that your friend is/was struggling with thoughts of suicide.

Myth
People who talk about suicide are just trying to get attention.

Fact
People who die by suicide usually talk about it first. They are in pain and oftentimes reach out for help because they do not know what to do and have lost hope. Always take talk about suicide seriously. Always.

Myth
People who are suicidal want to die.

Fact
Most people who die by suicide do not want to die. They simply want the pain of living to stop.

Fact
There is rarely just one factor that will cause someone to think of suicide. People who think of suicide are usually experiencing many negative things, not just one. On the other hand, it only takes one positive thing to prevent people from thinking of suicide. For example, if someone has even one good relationship or one activity that they really love, or if they have one really great personality trait like high self-esteem, this can prevent them from considering suicide.

Myth
People who are lesbian, gay, transgendered, or questioning their sexuality have a high risk of suicide throughout their lives.

Fact
LGBTQ youth are more at risk of suicide than the general population of youth, but their risk drops when they become adults. This is because adults generally are more accepting of who they are, and they’ve usually build up friendships with people who accept them.

Myths and Facts about SuicideLESS

Risk and Protective Factors for Suicide

Youth are at greater risk of suicide if they have:

Youth are at a reduced risk of suicide if they have:

Risk and Protective Factors for SuicideLESS

Stig·ma: noun – a mark of shame or disgrace (Merriam-Webster).

People who are responsible for perpetuating suicidal stigma engage in behaviors such as stereotyping, distrust, shunning, and avoidance toward those affected by suicide (Cvinar, 2005).

Suicide stigma has deep roots in religion and law.  The world’s major religions have taken a dim view of suicide if not explicitly condemning the act. Most states considered suicide a crime until the twentieth century and under Canadian law, suicide was a crime until the 1970s.  Thus, the term “committed suicide” strongly suggests suicide is a crime, thereby further entrenching the stigma associated with suicide.  Today, we use the phrase ‘died by suicide’ instead of “committed suicide” to show the shift in thinking.

While public perceptions around suicide are shifting, stigma persists. Stigma often keeps people who considering suicide from seeking help or openly talking about their thoughts and feelings with family and friends. Further, stigma plagues people who are bereaved by suicide, those who have lost someone to suicide as well. These ‘survivors’ often benefit from professional grief support but may be reluctant to seek it because of the stigma.

Although suicide in Canada is no longer a crime, the stigma persists.  The many myths associated with suicide have also contributed to the perseverance of stigma. Notions that people who kill themselves are “cowards” and “selfish” persist to this day, while attempters are often viewed as “attention seekers” who are not to be taken seriously.

What can we all do to fight stigma about suicide?

Theories of suicide: Why do people kill themselves?

The following is excerpted from Centre for Suicide Prevention’s infoExchange column Why do people kill themselves?

The reasons for why a person dies by suicide are usually numerous and complex, it is rarely the outcome of one single factor.  Why do some people consider suicide while others with seemingly similar circumstances do not? Though researchers are unclear, some suggest that the thoughts and feelings a person has about their circumstances play a role in bringing them to the point of considering suicide. Researchers also contend that people who consider, attempt or die by suicide do not actually want to die: they want their intolerable psychological pain to end and at the point of crisis, they do not see another way out (Baumeister, 1990; Shneidman, 1996).

What could cause so much emotional pain a person would consider suicide?

There are certain things people who are suicidal may say or do to indicate their thoughts. Be on the lookout for the warning signs!

Things they may be saying

Some of the things the suicidal person might say and the associated feelings include:

Things they may be doing

Watch for any significant changes in behaviour:

All suicidal thoughts or threats must be taken seriously.  If you are concerned about someone, tell an adult about it, or call your local crisis line. Get help from family, friends, teachers, counsellors, doctors, crisis lines, mental health services or hospital emergency departments.