Self-harming behaviours continue to be a major issue in Canada. This is especially true for young people, whose self-harm rates far outnumber those for adults. Self-harm can sometimes be associated with increased suicidality.

Self-harm has been defined as “a preoccupation with deliberately hurting oneself without conscious suicidal intent, often resulting in damage to body tissue” (Muelehkamp, 2005, p.324).

Self-harm does not include tattooing or piercing, or indirect injury such as substance abuse or eating disorders (Self-Injury Outreach and Support [SIOS], n.d.).

As one would expect, having multiple terms for self-harm creates misunderstanding and confusion both in academic research and in clinical settings.

Some researchers classify all forms of self-injury on a suicidal continuum (preceding suicidal ideation), regardless of the victim’s intent. Others emphasize the marked differences between self-harm and attempted suicide, and believe they should be separate areas. 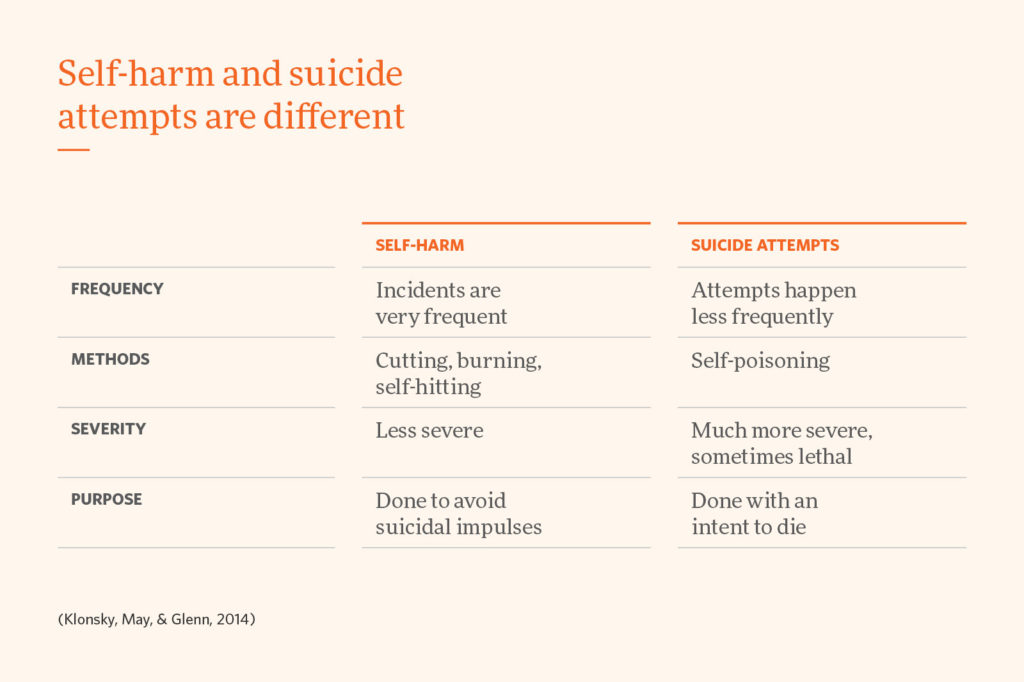 The majority of those who self-injure do not have suicidal thoughts when self-injuring (Klonsky, May & Glenn, 2014).

Although self-harm is not the same as suicide, self-harm can escalate into suicidal behaviours. The intent to die can change over time. One study found that almost half of people who self-harm reported at least one suicide attempt (Klonsky, 2011). 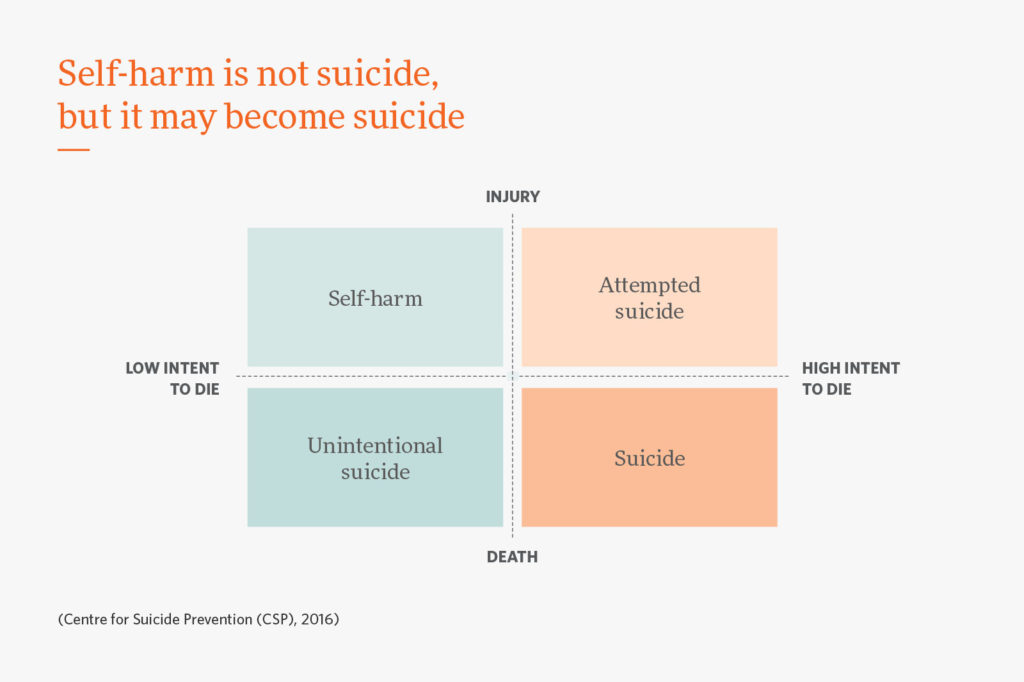 Self-harm can also lead to suicide when:

Because self-harm can become suicide, it is highly recommended that every patient who self-harms be assessed for suicide risk (SIOS, n.d.). 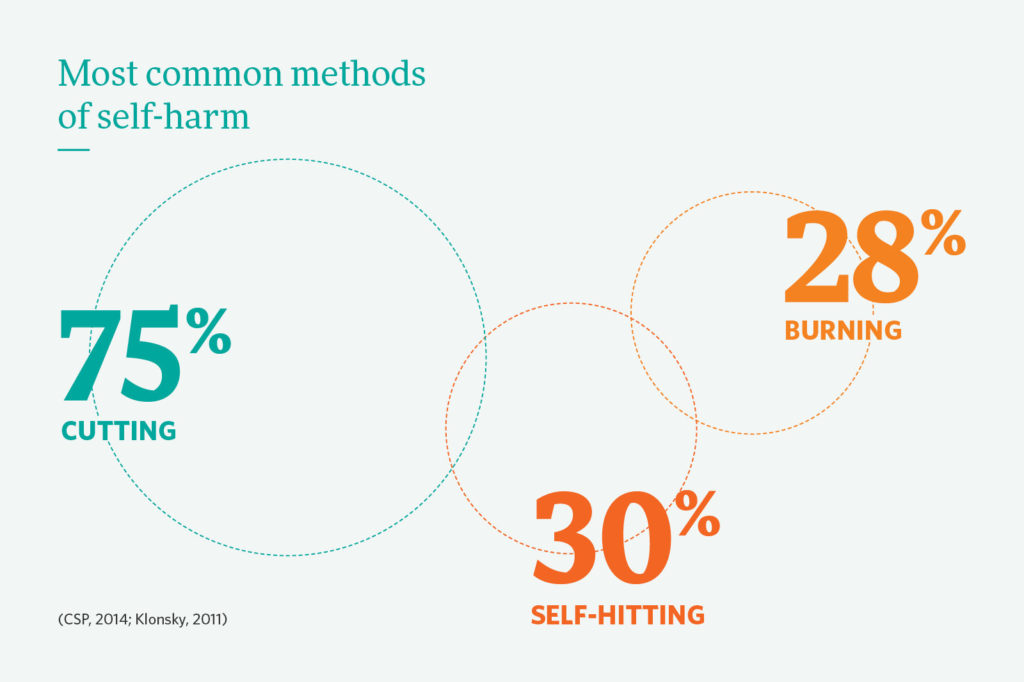 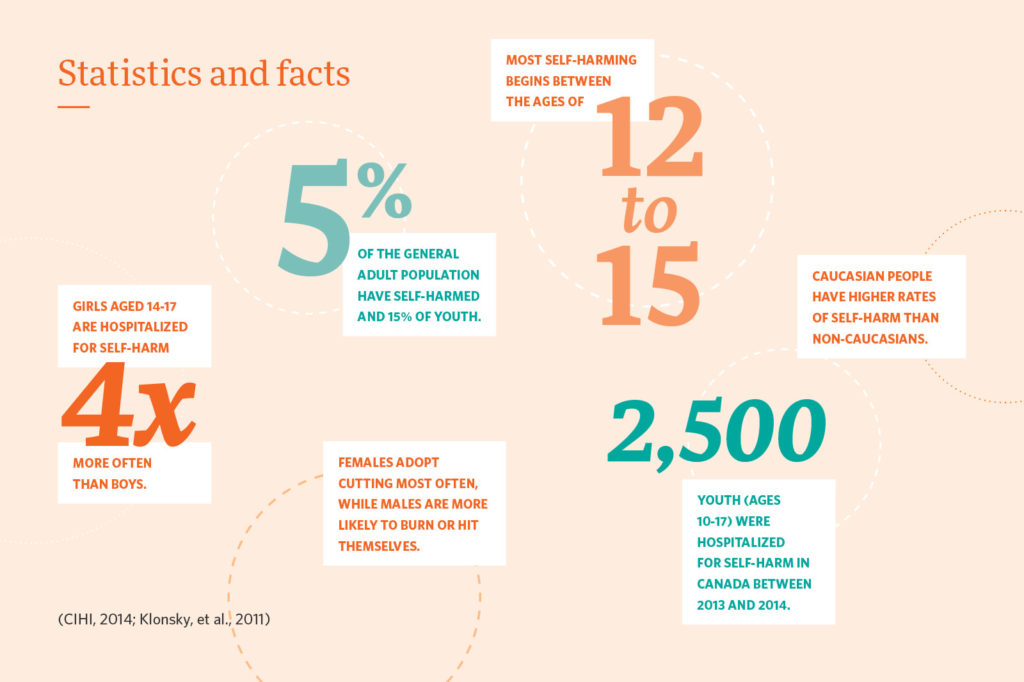 Why do people self-harm?

People are more likely be at risk for self-harming behaviours if certain factors are present, such as:

These risk factors may cause someone to adopt self-harm as a learned coping behaviour to satisfy unmet needs. These behaviours are attempts to compensate for the lack of healthy fulfillment in their lives (CSP, 2014). 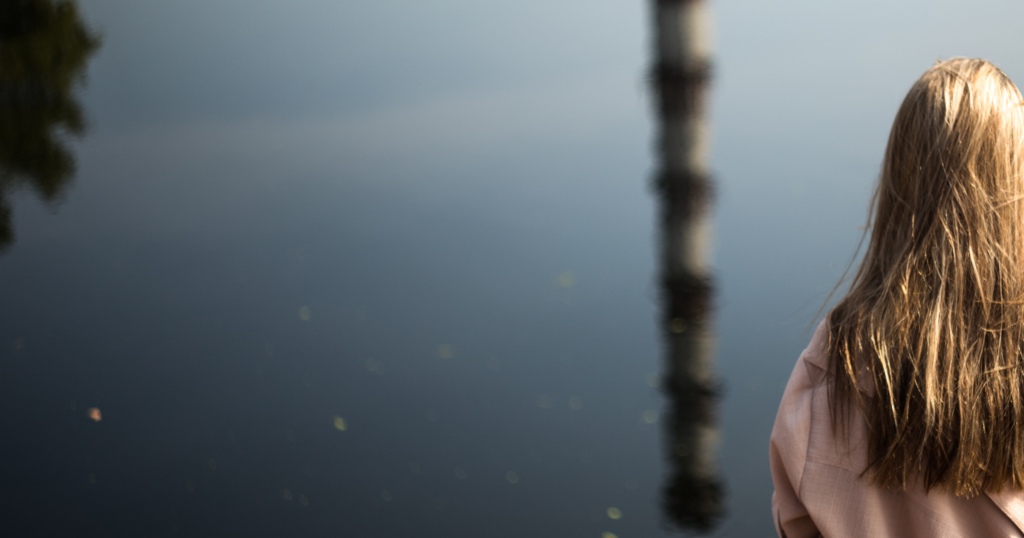 People self-harm for a number of reasons, including:

How can you tell if someone is self-harming?

People who self-harm may:

Cognitive Behaviour Therapy (CBT) is a psychological therapy that aims to address issues such as anxiety and depression, as well as a range of other mental health concerns. It helps someone become aware of inaccurate or negative thinking, so challenging situations can be seen more clearly and responses to them are more effective.

Dialectical Behaviour Therapy (DBT) is a variation of CBT treatment designed for individuals with self-harming behaviours, such as self-cutting, suicidal thoughts, and suicide attempts (Sanderson, 2008). The focus of DBT is to help a person change behaviours that may be self-destructive – such as self-harm – and work toward a more fulfilling life.

Problem Solving Therapy (PST) is a brief psychological intervention that focuses on identifying the specific problems that an individual is facing, and generating alternative solutions to these problems. Individuals learn to clearly define a problem that they face, brainstorm multiple solutions, and decide on the best course of action (Hasking, 2010; CIHI, 2014; Sanderson, 2008).

A U.S. based treatment approach, professional network, and educational resource base which is committed to helping to achieve an end to self-injurious behaviours.
www.selfinjury.com

SIOS is a non-profit outreach initiative providing information and resources about self-injury to those who self-injure, those who have recovered, and those who want to help.
www.sioutreach.org

Centre for Suicide Prevention. (2014). The 5 things we wish all teachers knew about: Self-harm and suicide. Retrieved from https://connect.srv.ualberta.ca/p5rd64xyc0t/?launcher=false&fcsContent=true&pbMode=normal

Grantz, K. (2001). Measurement of deliberate self-harm: Preliminary data on the Deliberate Self- Harm Inventory. Journal of Psychopathology and Behavioral Assessment, 23(4), 253-263.

Klonsky, E., May, A. & Glenn, C. (2014). The relationship between nonsuicidal self-injury and attempted suicide: Converging evidence from four samples. Journal of Abnormal Psychology, 122(1), 231-237.

Self-Injury Outreach and Support.(n.d.). SIOS: A guide for school professionals. Retrieved from http://www.insync-group.ca/publications/SiOS_School_Professionals.pdf