The statistics, research, language, and links used were current when this toolkit was published, but may have become outdated. Please contact us at [email protected] for the most current information, or refer to our newer resources or latest statistics.

The World Health Organization (WHO) predicts that by the year 2030 depression will be the leading cause of disability worldwide (World Federation for Mental Health, 2012).

People with depressive illnesses carry out the majority of suicides. MDD is also the most common co-occurring disorder with other disorders, (Substance Use Disorder [SUD], for example) in precipitating suicide (Mood Disorders Society of Canada, 2013).

Note: Bipolar Disorder (and Related Disorders) and Anxiety Disorders will not be examined in this Toolkit. The complexity and prevalence of these disorders cannot be sufficiently covered in the limited space available here.

MDD is classified by the American Psychiatric Association as: 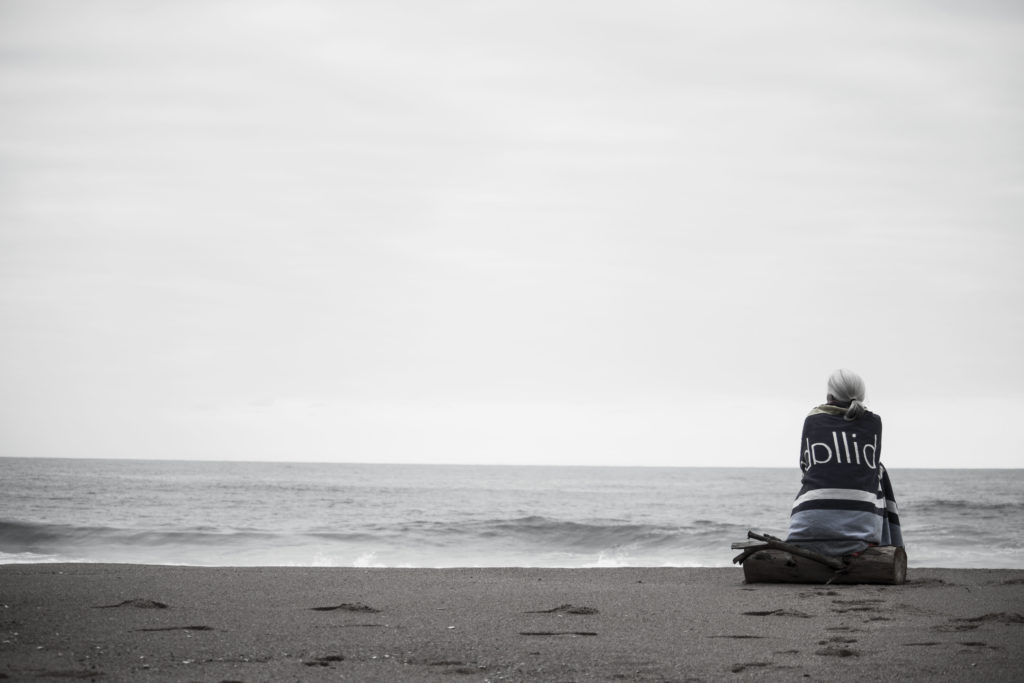 Postpartum Depression: 13% of mothers will experience major symptoms of depression that persist for longer than 4 weeks after delivery and affect a mother’s social and emotional functioning.

Psychotic Depression: A Major Depressive Episode (MDE) can become so severe that a person experiences hallucinations (hearing voices or seeing people or objects that are not really there) or delusions (fixed beliefs that have no basis in reality).

Dysthymia (Persistent Depressive Disorder): is a continual (chronic) low mood lasting for a period of 2 or more years (without an MDE). Moderate depression symptoms such as insomnia (or hypersomnia), low energy or fatigue, or poor concentration are experienced.

Seasonal Affective Disorder: Seasonal Affective Disorder (SAD) is a type of depression that is influenced by weather and the time of year. It is more common in northern climates where there are fewer hours of sunlight in the winter. Symptoms include: extended sad mood, increased sleep and appetite and less ability to work and relate to others. (Centre for Addictions and Mental Health, 1999; American Psychiatric Association, 2013). 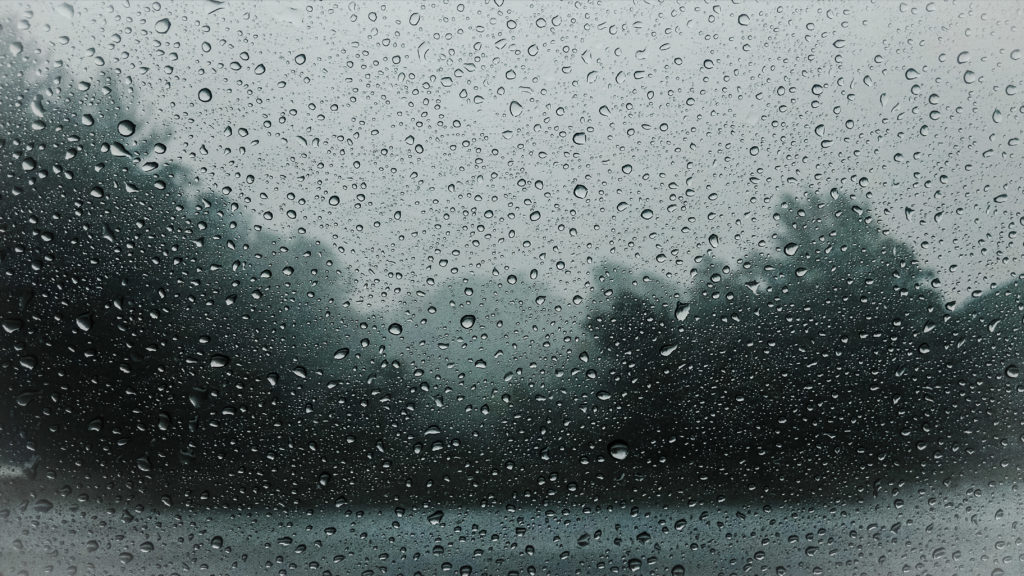 Risk factors for suicide in a person who is experiencing depression: 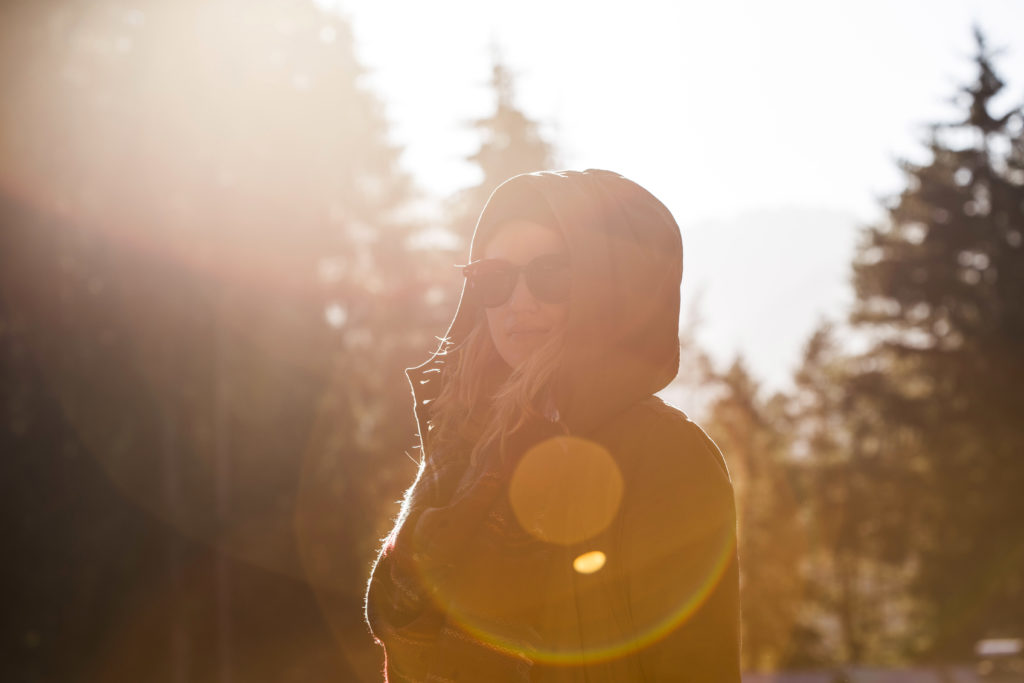 Living with a Black Dog: His Name is Depression

By Matthew Johnstone is a powerful illustrated book about the crippling effects of depression. The title from Winston Churchill’s description of his own dark depression – “the black dog”.

Johnstone presents Depression as a hulking dog that is incredibly difficult to shake off or tame.

He truly captures in words and pictures the debilitating nature of this condition. Here are some excerpts: 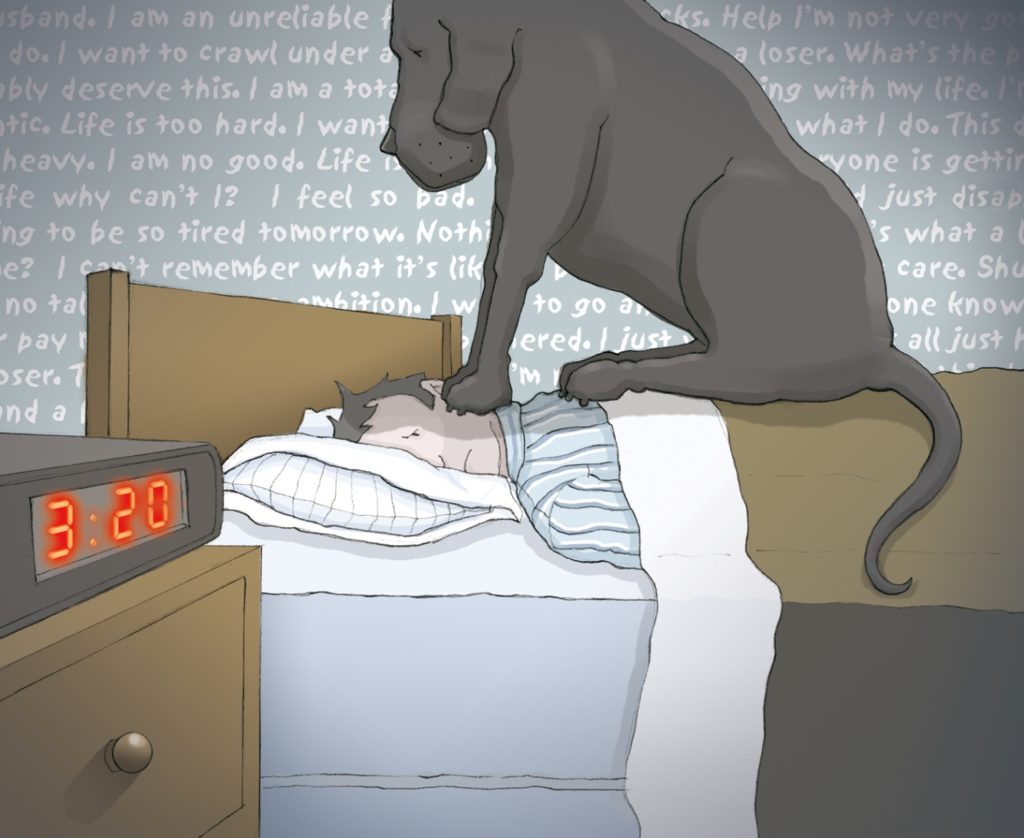 When you’re irritable, exhausted and brimming with self-doubt, the Black Dog likes nothing more than to visit you in the wee hours of the morning and remind you of these things. 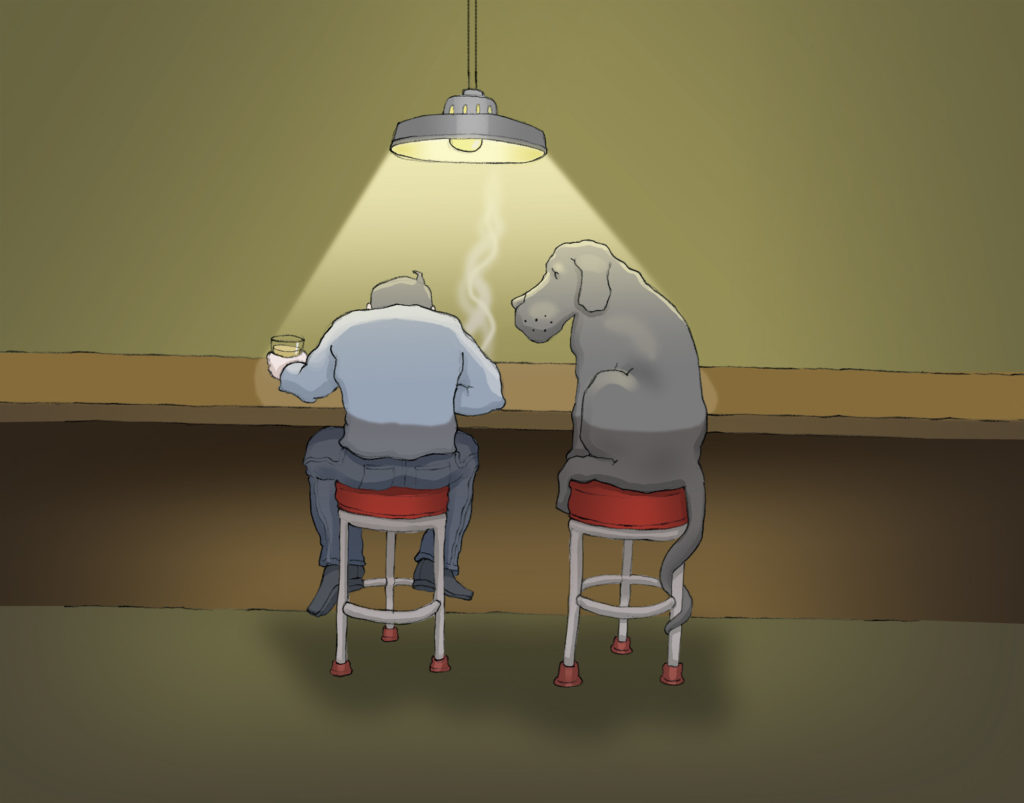 People understandably like to distance themselves from pain, be it physical or mental. It’s not uncommon for people to treat their Black Dog with repeated doses of self-medication.

Left to his own devices, a Black Dog will take you to a place where you feel totally isolated from everything and everyone. 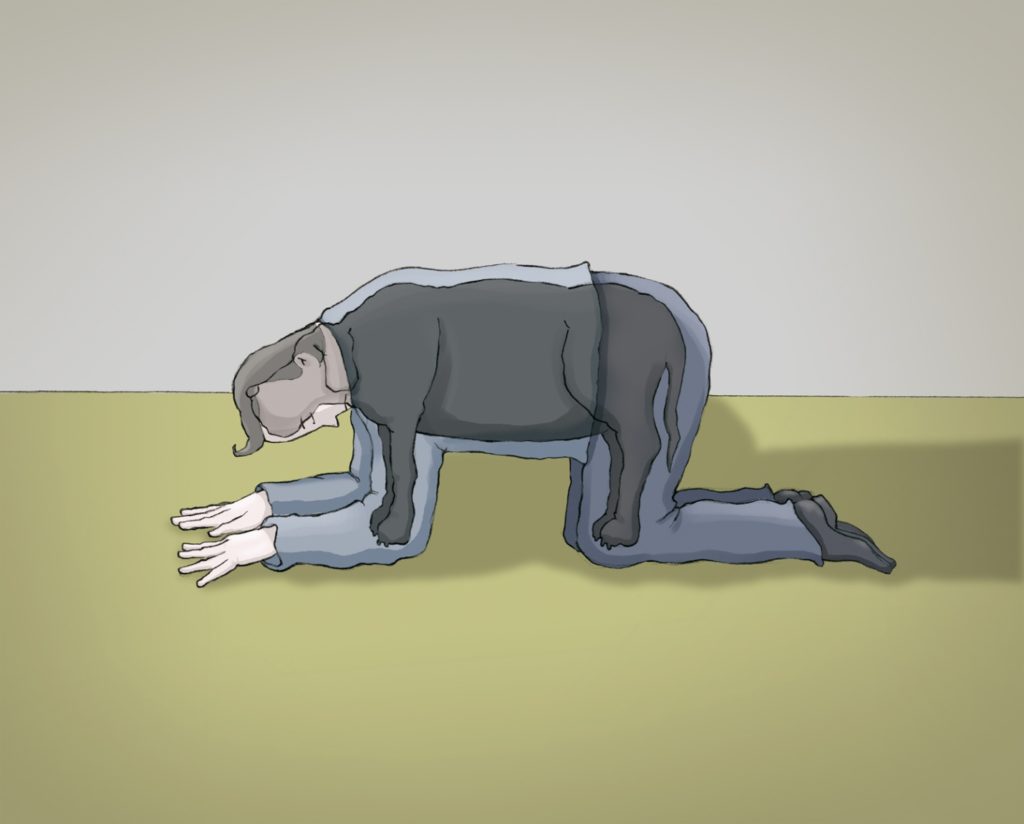 He may not rest until he has hijacked all aspects of your life and made you question what the point of that life is.

Order a copy of Living with a Black Dog: His Name is Depression.

Teens may be at a higher risk because of family and school pressures and major life and hormonal changes.

The likelihood of the onset of MDD increases with puberty. Starting in early adolescence, females experience 3 times the rate of MDD than males (American Psychiatric Association, 2013).

If an MDE is experienced by a young person and it is untreated, there is a greater chance for suicidality in later life (Thompson, 2012).

Depression can be difficult to recognize because a teen’s mood swings and irritability is often mistaken for typical behaviours of adolescence, rather than depression.

Young people receive treatment for depression less than all other age groups. Some estimates suggest that only 1/5 of those afflicted get the help they need (Smith and Segal, 2014). Parents, teachers and other caregivers must be informed about depression and get youth the required treatment (Canadian Mental Health Association, 2013).

Those +65 years experience many stresses that can occur as they age, including the loss of loved ones, lifestyle changes, moving to assisted-living facilities, loss of physical independence or health. There can be a tendency to view these responses to stress in later life as natural and inevitable. But major life stresses can also manifest as Major Depression. Misdiagnosis is common and, consequently, MDD can be very under-diagnosed in the older adult population. 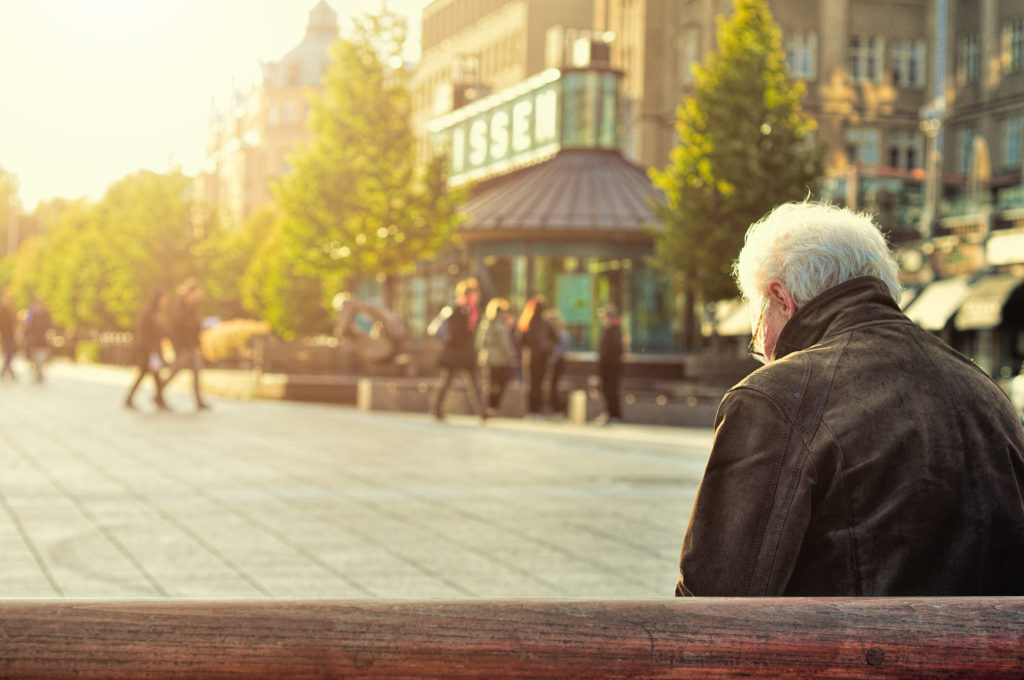 Older males are more at risk when depression is coupled with loss of autonomy. Men have a greater inability to adjust to agerelated limitations—and to loss of control. They are more vulnerable to suicidality (Bamonti, 2014).

A new tool for MDD diagnosis?

There could soon be a blood test used to detect early-onset Major Depressive Disorder, according to a study published in Translational Psychiatry. The test measures genetic indicators – RNA markers – in the blood.

This objective, biological method is significant. It could augment, or even replace, psychiatric depressive assessments and allow for a more expedient diagnosis for MDD overall (National Institute of Health, 2014).

Depression is a treatable mental illness

Clinicians should consider several factors in identifying patients at higher risk so that they can be monitored more closely. Cooccurring disorders, like Alcohol Use Disorder (AUD), are common for those suffering depression. Patients presenting depressive symptoms should be screened for suicide risk and asked specifically about alcohol consumption (Sher, 2006).

People with bipolar disorder are more likely to seek help when they are depressed than when experiencing mania or hypomania. A thorough medical history should be obtained to ensure that bipolar disorder is not mistakenly diagnosed as MDD. (Oquendo, 2004; National Institute of Mental Health, n.d.).

Primary health providers should also screen for depression whenever possible due to the high prevalence of depression in those suffering pain (Cheatle, 2014).

Depression as an illness should be treated with the same degree of concern and urgency as other life threatening conditions (Mood Disorders Society of Canada, 2014)

Taking care of individual needs such as proper exercise, regular sleep schedule, a nutritious and balanced diet, avoidance of alcohol are all good base-line standards for sound mental health.

Psychotherapy depends on a supportive, comfortable relationship with a trusted therapist. Counselling sessions focus on a patient’s present concerns and effective ways to treat them. Some therapies include Interpersonal Therapy (IPT) and Cognitive Behavioural Therapy (CBT). In IPT, people examine their depression in the context of relationships that may be contributing to their mood difficulties. CBT helps people examine how they interpret events around them, and how negative thoughts contribute to and maintain a depressed mood. Therapy is also helpful in a family or group context.

Medications are used to elevate levels of neurotransmitters (serotonin, norepinephrine and dopamine) in the brain which affect mood. These are often prescribed to complement psychotherapy or other types of counselling.

Psychoeducation is the practice of formal education groups—run by mental health professionals–used to inform patients about (their) depression. This self-knowledge can serve as an empowering therapy,  as patients learn about living and coping with their disorder and what treatment options and resources are available.

It is possible that a Black Dog may always be part of your life, but with patience, humour, knowledge, and discipline even with worst Black Dog can be made to heel (Johnstone, 2006). Bartha, C., et al. (1999). Depressive illness: A guide for people with depression and their families. Toronto, ON.: Centre for Addiction and Mental Health.

The Samaritans. (2014). Know the warning signs. Retrieved from http://samaritansnyc.org/know-the-warning-signs/

Smith, M. and Segal, J. (2014). Parents’ guide to teen depression: Learn the signs of depression and how you can help. Retrieved from http://www.helpguide.org/articles/depression/teen-depression-signs-help.htm